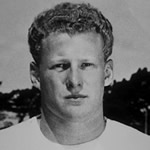 Jensen was born in San Francisco, California. His parents divorced when he was five, and he was raised by his mother, who frequently moved the family. After serving in the Navy toward the end of World War II, he became an All-American in two sports at the University of California. As a baseball pitcher and outfielder, he helped California to win the inaugural College World Series in 1947. He pitched Cal to victory in the regional final by outdueling Bobby Layne of Texas, and in the championship Cal defeated a Yale team featuring future President George Bush. As a football halfback, Jensen was a consensus All-American as a junior in 1948, becoming the first Cal player to rush for 1,000 yards. In the season-ending 7–6 victory over Stanford he ran for 170 yards, kicked a punt for 67 yards, and had a 32-yard run late in the game in a 4th-and-31 situation. Cal ended the regular season at 10–0 under coach Pappy Waldorf, winning a share of its first Pacific Coast Conference title in ten years, and Jensen placed fourth in the Heisman Trophy voting, with Doak Walker taking the award. In the 1949 Rose Bowl, Jensen scored a touchdown in the first quarter to tie the game 7–7, but fourth-ranked Cal was upset 20–14 by seventh-ranked Northwestern.

In May 1952 Jensen was sent to the Washington Senators in a six-player deal, and he made his first All-Star team. He finished the season with a .286 batting average and 80 RBIs, leading the league with 17 assists and placing third in the AL with 18 steals, a total he duplicated in 1953. He was traded to the Red Sox in December 1953, and led the AL with 22 steals in 1954, also finishing third in RBIs (117) and fourth in home runs (25). But despite his speed he also set a major league record by grounding into double plays 32 times, breaking fellow Red Sox Bobby Doerr’s 1949 total of 31; the record would stand until Red Sock Jim Rice grounded into 36 double plays in 1984. No longer facing the pressure of becoming his team’s principal star, Jensen again made the All-Star team in 1955, leading the league with 116 RBIs and finishing tenth in the MVP vote.

In 1956 Jensen batted a career-high .315 and led the AL with 11 triples, and in 1957 he had 103 RBIs and led the league in both assists (16) and double plays (4). The 31 year-old star had his best season in 1958, earning the AL MVP and beating out Bob Turley, Rocky Colavito and Bob Cerv with a 286 batting average, a league-leading 122 RBIs, also placing second in the AL with 99 walks and fifth in home runs (35), doubles (31), total bases (293) and on-base percentage (.396). In June of that same year, he set a Red Sox club record for most home runs in a single month (since tied by David Ortiz) with 14, and in July made his final All-Star team. In 1959 he again led the league in RBIs (112) and won his only Gold Glove after leading the AL in double plays (4) for the second time; he also scored a career-best 101 runs and stole 20 bases, finishing third in the AL in steals for the fourth time among his seven Top 10 finishes. He came in tenth in the MVP balloting.