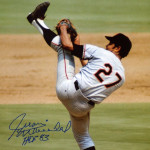 Juan Antonio Marichal Sánchez (born October 20, 1937),[1] nicknamed “the Dominican Dandy”, is a Dominican former right-handed pitcher in Major League Baseball who played for three teams from 1960 to 1975, almost entirely the San Francisco Giants.[1] Known for his high leg kick, variety of pitches, arm angles and deliveries, pinpoint control, and durability,[2][3] Marichal won 18 games to help the Giants reach the 1962 World Series, and went on to earn 191 victories in the 1960s, the most of any major league pitcher. He won over 20 games six times, on each occasion posting an earned run average (ERA) below 2.50 and striking out more than 200 batters, and became the first right-hander since Bob Feller to win 25 games three times; his 26 wins in 1968 remain a San Francisco record. One of the most outstanding performers in All-Star history, he was named to the team in nine seasons, recording an ERA of 0.50 in eight appearances and being named Most Valuable Player of the 1965 contest.

Marichal led the National League (NL) in wins, innings pitched, complete games and shutouts twice each. He was often overshadowed by his contemporaries Sandy Koufax and Bob Gibson;[4][5] in each of Marichal’s four best seasons, either Koufax or Gibson won the Cy Young Award, always by unanimous vote. He pitched a no-hitter in June 1963, and two weeks later outdueled Warren Spahn for a 1–0 victory in 16 innings; Marichal also had three one-hitters – including one in his major league debut – and six two-hitters. On August 22, 1965, Marichal was one of the principal figures in perhaps the most violent incident in major league history. While batting in a heated game against the archrival Los Angeles Dodgers, he struck catcher John Roseboro in the head with his bat after Roseboro had thrown the ball back to the mound, brushing past Marichal’s face; the blow opened a gash in Roseboro’s head that required stitches, and set off a huge brawl between the teams. Marichal was suspended and received a then-record fine, also paying a financial settlement, but the two players later reconciled, and eventually became close friends.

Marichal’s 238 wins, 2.84 ERA, 244 complete games and 3,444 innings pitched with the Giants are San Francisco team records; his 2,281 strikeouts, 446 games started and 52 shutouts with the club place him behind only Christy Mathewson in franchise history. Upon his retirement, he ranked sixth in NL history in strikeouts (2,282) and shutouts; his complete games ranked ninth among NL pitchers active after 1920. His 2.89 ERA placed him second behind Whitey Ford, and his average of 1.82 walks per nine innings placed him fifth, among pitchers with at least 2,500 innings pitched since 1920, and his winning percentage was the sixth highest among modern NL pitchers with 200 wins. Marichal was also an agile fielder, with his 291 putouts tied for sixth in major league history. His 243 wins were the most by a foreign-born pitcher in over half a century, and he held virtually every career record for Latin American pitchers before most of them were broken by Luis Tiant and Dennis Martínez. Marichal was inducted into the Baseball Hall of Fame in 1983,[6] with Roseboro’s support; he was the first Dominican player, and the first foreign-born pitcher, ever selected.