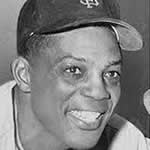 Willie Howard Mays Jr. (born May 6, 1931), nicknamed “the Say Hey Kid”[a] and “Buck”, is a former center fielder in Major League Baseball (MLB) who played in the National League (NL) between 1951 and 1973, almost entirely for the New York/San Francisco Giants. Mays joined the Birmingham Black Barons of the Negro American League in 1948, playing with them until the Giants signed him once he graduated from high school in 1950, then won the Rookie of the Year Award in 1951 after hitting 20 home runs to help the Giants win their first pennant in 13 years. After spending most of the next two years in the United States Army during the Korean War, he was named the NL Most Valuable Player (MVP) in 1954 after winning the batting title with a .345 average and hitting 41 home runs. His over-the-shoulder catch of a Vic Wertz fly ball in Game 1 of the 1954 World Series is one of the most famous baseball plays of all time. The Giants swept the heavily favored Cleveland Indians for the lone World Series triumph of his career, and the team’s last title before relocating to San Francisco after the 1957 season.

A 24-time All-Star, tying him for the second most in history, Mays became a perennial MVP candidate, finishing in the top six in the voting in eleven of the next twelve seasons. He led the NL in home runs four times and in slugging percentage five times while batting over .300 and posting 100 runs batted in (RBI) ten times each. In 1955 he made a run at the Triple Crown, leading the league with 51 home runs and finishing second in batting and RBI. He was the runner-up for the MVP in 1958 after hitting a career-high .347, and again in 1962 after leading the Giants to another World Series with 49 home runs and 141 RBI. By 1963, he was making over $100,000 a year, setting a record at the time with a $105,000 contract. He was again named the MVP in 1965 after hitting .317 with a league-leading 52 home runs, becoming the second NL player to hit 50 more than once and setting a franchise record that stood until Barry Bonds hit 73 in 2001. Mays was also at the forefront of a resurgence of speed as an offensive weapon in the 1950s, leading the league in stolen bases four times, triples three times and runs twice, with his 179 steals during the decade topping the major leagues; he was the first NL player to hit 30 home runs and steal 30 bases in the same season, and the first player in history to reach both 300 home runs and 300 stolen bases. He held the NL record for career home runs from 1966 until Hank Aaron passed him during the 1972 season, during which time he became the second player and the first right-handed hitter to hit 600 home runs. Mays also set standards for defensive brilliance, winning 12 consecutive Gold Glove Awards after their creation in 1957, still a record for outfielders; he led NL center fielders in double plays five times and assists three times. He ended his career with a return to New York after a mid-season trade to the New York Mets in 1972, retiring after the team’s trip to the 1973 World Series. He served as a coach for the Mets for the rest of the decade, and later rejoined the Giants as a special assistant to the president and general manager.

A classic example of a 5-tool player, Mays finished his career with a batting average of .302. Upon his retirement, he held the NL record for career runs scored (2,062), and ranked second in league history behind Stan Musial in games played (2,992), third in at bats (10,881), runs batted in (1,903), total bases (6,066), extra-base hits (1,323) and walks (1,464), fourth in hits (3,283), fifth in slugging percentage (.557), and eighth in doubles (523); his 140 triples ranked fourth among players active after 1945. He holds major league records for games as a center fielder (2,829), putouts as an outfielder (7,095) and extra-inning home runs (22), and ended his career behind only Ty Cobb in total games as an outfielder (2,842) and ranking seventh in assists (188) and third in double plays (59) in center field. Regarded as one of the greatest baseball players of all time, he was elected to the Baseball Hall of Fame in 1979 in his first year of eligibility. He was named to the Major League Baseball All-Century Team in 1999 and ranked second on The Sporting News’s “List of the 100 Greatest Baseball Players”, behind only Babe Ruth. President Barack Obama presented him with the Presidential Medal of Freedom in 2015.